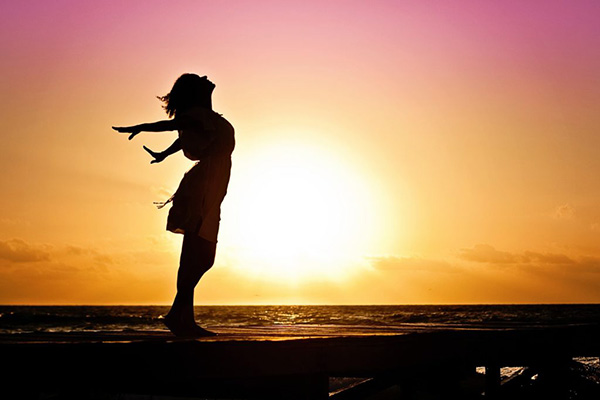 Every day for almost two years I’d driven a typical DC area commute from Arlington, VA to Rockville, MD. (For those of you not from the area that means a 30 minute commute usually took 60 to 90 minutes. Traffic!)

The prettiest stretch of the drive was on the George Washington Memorial Parkway, which is a two lane forested road that runs along the Potomac River.

I remember one drive on the parkway more than any other.

It was a pretty spring day. The sun was shining. And I’d just handed in my two weeks notice to a job that I’d been miserable at for the past two years.

I must’ve left early that day, because the traffic was light. My windows were rolled down.

And the feeling I had was PURE FREEDOM.

I’m pretty sure I giggled at nothing in particular and sang every song on the radio the whole ride home.

I was out of there!

I was going to live my life!

No more crummy commute. No more days at a job that bored me to the bone. No more cubicle.

I wish I could say that feeling and moment lasted longer, but it dissipated over the next week as reality set in. I had only the vaguest of plans of what I was going to do next.

As a result, the following months were scary, stressful, unsettling times.

I had quit more to get away from a bad situation rather than because I had a clear plan about what would be better.

Here’s another mini-mental exercise for you.

If you were to quit your job this week (again! not saying to do this!), which category would you fall into?

Quitting to flee a particular situation and living on hopes?

Or quitting to go towards something with a thoughtful, vetted plan?

From my experience, one of these is a stronger position to be in than the other.

In fact, having clarity about where you’re going next is the most powerful, freeing thing you can have. Think about it.

What does a lack of clarity about what to do next mean? Staying in the same place because you can’t think of anything better to do!

If you want to leave your current situation, the top priority to focus on is achieving clarity about what you want to do next. Not only will this speed up your departure time. It will also set you up to be successful at the tail end of that initial feeling of freedom.

Not sure how to get clear on what to do next? Aha! That’s our specialty. Apply today for the opportunity to methodically create a game plan that you feel clear and confident about with our expert help.